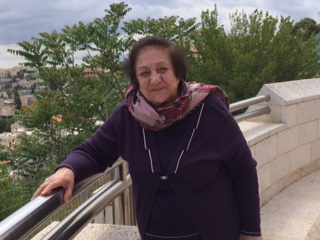 Wednesday, 13th April.  I travel to Nazareth to reconnect with my friend Violette.  We first
met in 2004 when Violette was part of a visit of Israeli and Palestinian peace women to the UK organised by ‘Women to Women for Peace’, and have kept in touch ever since.  A Christian Palestinian Israeli and active within ‘Sabeel’, Violette remembers 1948 and how Galilee was before the formation of the Israeli state – a place where Muslims, Christians and Jews lived side by side and cooperated.  She used to run a pharmacy in the centre of Nazareth, and has degrees from both French and Italian universities.

Over a delicious breakfast of pizza-type bread topped with zata’ar, parmesan cheese and labane, we talk about the work that Violette is involved in at the moment.  She is concerned that Palestinian culture is being lost and wants to find creative ways of keeping her heritage alive.  She shows me a YouTube clip of a drama created by her daughter Faten called ‘Living Stones’ in which the stones of significant buildings come to life and reveal the history and culture of the place.  We also talk about ‘Nasijona’, a project that Violette is creating in Nazareth, which aims to bring women together to revive handicrafts which are in danger of dying out, but also to recreate the harmonious Nazareth community that Violette remembers.  When I visited last year, the project was just an empty building and an idea.  Violette describes how the idea has now taken off and inspired women of different ages, backgrounds and faiths to come together.

We talk about barriers and the actions necessary to remove them.  Violette tells me a story of one of the founder members of Machsom Watch – the Israeli organisation that monitors the checkpoints (Machsom means ‘barrier’ in Hebrew).  Despite the fact that this woman had set up an organisation to monitor the abuse of human rights and the harassment of Palestinians at checkpoints, she had still been wary of visiting Violette in Nazareth, a predominantly Arab city.  This demonstrates that barriers are not only physical, but accumulate in the minds of those who never meet – creating myths and monsters.  She explains that ‘Nasijona’ is a combination of the two words ‘barrier’ and ‘way’ – translating as something like ‘the Way to Remove Barriers’.

We visit the Silesian School, which overlooks the city.  From here it is plain to see how the original Arab city is squeezed into a confined area, whereas Nazareth Ilit, the newer Jewish area of the city, expands across the hilltops.  Violette remembers how, after 1948, Palestinian families fled to the Silesian monastery after their villages were destroyed and they were forbidden to return.  Some were tricked into signing papers which they thought gave them the deeds to a new apartment in Nazareth, but were in fact an agreement to give up any claim to their land.  The current residents of Nazareth are the descendants of these displaced people.

In the afternoon we have lunch in a café in Nazareth.  Violette remarks positively on the fact that the menu is in Arabic.  Although Arabic is an official language in Israel, it is in places disappearing from public places, and is in danger of being supplanted by Russian.  We meet with Jonathan Cook, a British journalist and commentator and share our understanding of the present political reality of what is going on in the region.  I comment on the fact that I have just received the February update from EAPPI (the Ecumenical Accompaniment Programme in Palestine and Israel), which documents a dramatic increase in demolitions and displacements in Area C of the West Bankso far in 2016.  We conjecture as to whether the ultimate aim of the Israeli government is to annex Area C – 60% of the West Bank.  Jonathan thinks that this is what is happening, as does Jeff Halper (Director of ICAHD – the Israeli Committee against House Demolitions).  Once this happens we are into an end game – the creation of Bantustans which will be barricaded in and controlled like Gaza.  We talk about how good the Israeli government is at controlling the media, and agree that it’s important to keep on telling the truth about the reality we see.  This has nothing to do with anti-Semitism, but is about speaking out for respect for human rights and international humanitarian law, based on values of true democracy and humanity.

We finish the day by visiting ‘Nasijona’ in action.  Women sit around in groups and there is an air of contented industry.  Older expert needlewomen show younger women how to create traditional articles of beauty.  Under their deft fingers and patient smiles works of art slowly emerge.  Muslim and Christian, old and young, veiled and unveiled are joined in this enterprise – recreating heritage and community.  Violette points to one striking fact: they are all smiling.

This may not change the political map, but it defies a narrative of division, distrust and incompatibility.  Alongside traditional handicrafts, these women are recreating a culture of trust and hope for the future.