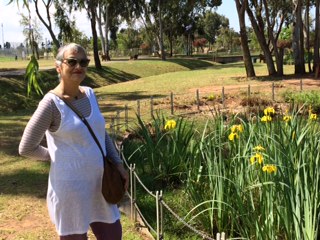 It is Hanna who first introduces me to the concept of political tourism – a concept she has been looking at in her PhD thesis, an ethnography of the journeys of Machsom Watch members from their homes in Israel to the checkpoints between Israel and the West Bank in order to monitor the treatment of Palestinians crossing these checkpoints by IDF soldiers.  Political tourism involves a journey in space and time but also between two different cultures, with an aim to witness and create sociopolitical change.

Towards the end of my visit I experience periods of self-doubt.  Why do I repeatedly come to the area?  To scratch at the wounds of the other?  To confirm a particular political standpoint?  Is what I am doing really voyeurism, and do my visits do any good?  Could I, in fact, do more good by being active at home?  All these questions are valid, and worth looking at in some detail.

One reason for visiting the region on a fairly regular basis is to come as a witness and to stand alongside those who are suffering.  This largely means Palestinian communities because of the effects of the military occupation and harassment by radical settlers. During my visit I receive the latest EAPPI update from the teams in the field.  Their reports show that abuses of human rights have dramatically increased in 2016, including an increase in displacements and house demolitions in East Jerusalem and the West Bank.  Coming to the area and witnessing the effects of these policies on ordinary people is very powerful, especially as this truth is rarely conveyed in the Western media.  Although I haven’t been directly involved with EAPPI this time, I have heard how the Occupation affects the lives of ordinary people in Hebron and Gaza.  It is very important for people affected by violence to feel that they are heard, validated and taken seriously in a world that has largely ignored them.

For political tourism to be authentic, there should also be a desire on the part of the ‘tourist’ to be open to learning and change.  Meeting Rachel and Jenna this time helped me to realise that there are Jewish settlers living on the West Bank who wish to work for peace and understanding with their Arab neighbours.  I may not agree with their decision to live where they are, but I cannot doubt their sincerity in wishing to work towards a more peaceful society.  To address structural injustice, it is government policies that need to change and individuals like Rachel and Jenna may just help to create the social pressure which is necessary to trigger political change.

There are a number of factors which need to be taken into account by those campaigning for a more just and peaceful society.  As a political tourist I am hugely privileged in that I am able to return to a relatively peaceful stable society.   The people I am standing alongside largely don’t have that privilege.  I am also aware that I am relatively empowered, whereas the people we are working with are to a large extent dependent on the rules and whims of military authorities which control their movements.  To be authentic and sincere we need to recognise these inequalities, and to approach the work we are called to do with humility and respect.   For women like Hanna these challenges are to be felt even more keenly as it’s her government that is the oppressor.  She works for political change, knowing that change could mean radical change for her own society.

For our actions to be sincere and authentic, we also need to act on what we have witnessed on our return home – by telling others what we had witnessed and campaigning for change. Nor should the fact that we are active in seeking solutions to the Israel-Palestine conflict mean that we are inactive elsewhere.  We should speak out against human rights abuses and social discrimination wherever they occur – at home and abroad. 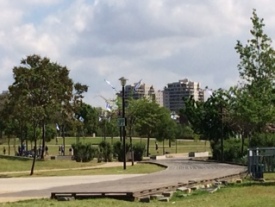 On my last morning Hanna and I visit her local park and shopping mall.  Here we seem a million miles away from the noisy, dusty litter-strewn streets of Gaza. Even here, however, there are factors which indicate the nature of Israeli society.  Hanna points out the fact that nearly all those serving in the shopping Mall are Palestinian Israeli.  On observing more closely I see that she is right.  Socio-economic discrimination seems to operate in Israel itself for the Palestinian minority (around 20% of the population).

Just before I leave Hanna is keen to show me a couple of YouTube clips which give her hope.  These are of the singer Ziv Yehezkel, born into a traditional Orthodox Jewish family, but who has learnt about traditional Palestinian oud-playing and singing, and taken the tradition to his heart. He now performs traditional songs and melodies alongside a Palestinian Israeli soprano Nisreen Qadri, backed by the Jerusalem-Andalou orchestra.  As with Violette’s Nasijona project, Hanna dreams of an intergrated society  where Israelis and Palestinians can live, work and be creative alongside one another, respecting one another’s culture and heritage.  Like Violette, Hanna seeks for hope through the creative arts.