‘Women to Women for Peace’ – The Mission

The mission statement of Women to Women for Peace (W2W4P): “World Peace will come through the will of ordinary people like yourselves” encapsulates the vision behind the founding of the organisation in 1984:

“No young mother in this country or any other wants her son to go and kill the sons of other young mothers and I believe that if inter-visitations were arranged between parties of young mothers from Britain … and from other countries who chose to join in, bridges of understanding could be built … as a REAL contribution to world peace”

The organisation consisted of a group of likeminded people who came together to build bridges between people from countries which have contrasting and conflicting political, philosophical, cultural and religious interests. W2W4P had numerous highlights during their thirty-year history as a non-profit organisation working for international solidarity.

Why you need to know about Women to Women for Peace

I hope that once you’ve read my articles you feel the same as I felt; that there are lessons to take away and how vital it is to have international solidarity movements. The work of W2W4P has left me feeling proud of Wales for being part of an amazing peacemaking organisation dedicated towards pacifism internationally as well as locally, bringing solidarity to our front doors. I feel positive that there is always something an individual or collective group can do to reach out and show support to other countries in distress.

Jane Harries, who was a member of W2W4P for over 20 years, said:

“It is difficult to gauge the impact that W2W4P had on my life and that of my family for many years.  When our children were small we opened our home to a variety of extraordinary peace women.  There was Marina, who traipsed all the way from Moscow to Bridgend on the train, bearing traditional Russian ornaments which still grace our living room.  Then there were the women from the former East Germany who were part of the street protests in Dresden which started the decline of the DDR and led to German unification.

As our children grew I was able to travel further afield and play an active role in visits that helped to break down prejudices and stereotypes between women from countries in conflict: Cuba and America; Israel and Palestine.  Thus W2W4P was able to contribute to building bridges of understanding and to help create networks focused on creating peaceful relationships.

Even today when in Israel and Palestine I visit my dear friends Hanna (Israeli) and Violette (Palestinian).  They are both still working for peace – for a solution based on justice and mutual respect for both peoples.  I admire them greatly, and am grateful to W2W4P for the opportunity to get to know them and to support them in their vision.”

A successful example of W2W4P’s success in building bridges between people with contrasting values and beliefs happened in 2004 when 8 women from peace organisations from Israel and Palestine came on a joint visit to the UK, including Cardiff, Wales (where they spoke at The Temple of Peace). I would like to invite readers to explore the motives and outcomes of such an important visit, and to learn more about international solidarity in action. 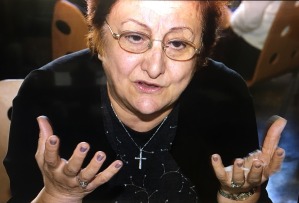 I have summarised below the aims of the Israel Palestine visit to show how these aims are relevant for today’s world which is characterised by ongoing international conflicts.  The story of the visit shows how a small group of dedicated individuals can make a positive difference:

Overall the visit was extremely successful. It was noted that the women from Israel and Palestine were brave, committed and shared the same hopes and concerns as women and families in Wales. Although they came from countries experiencing bitter conflict, the ability to meet and share their realities in a neutral safe space, enabled the women to develop a warm and affectionate relationship.  They fed back to members of W2W4P that they found the visit to the United Kingdom a positive experience and wished to continue their cooperation in the future. The visit encouraged a more informed understanding of the ways people were working for peace in the region. It was endearing that the women felt heartened and impressed by the level of support they were greeted with in Wales and England; they felt people’s concern for their respective communities, and for their work for peace under difficult circumstances.

The Israeli and Palestinian women returned home with a vision for the future.  They had gained inspiration from their visit and were able to formulate new ideas about how to move forward in their fight for peace and how people in the UK could support them in this. On returning home, they were able to organise joint initiatives and to meet in Jerusalem – building on the positive relationship that was made possible through the work of W2W4P.

Over its 30 year existence, the work and experience of W2W4P was tremendously valuable and rewarding. A lot can be achieved if we allow it to happen. The results from international solidarity movements can only be positive.  There is so much to learn beyond our borders and re-creating an organisation like Women to Women for Peace could allow us to make a positive contribution to peace in conflicting countries.

The motivation and dedication of members of W2W4P represents a desire for peace and friendship that can expand over oceans and cross national boundaries. It’s difficult to actually put into words how W2W4P held such inspirational and influential links to Wales in their fight for peace for thirty years. As an individual I am certainly proud of their achievements and want their successes to be heard.

What W2W4P has shown is how barriers and walls only perpetuate stereotypes, myths and fears; it is what the root of conflicts come down to. W2W4P’s motivation and passion have helped me to recognise what we have in common; Lucy Behenna, the co-founder of W2W4P in 1984 (originally called Mothers for Peace) states:

“Mother love is one of the greatest powers and it’s universal. Mothers of all creeds and colours, religions and no religions, whatever government they are under, desire the best for their children and I thought that great link between mothers we might use to help break down a little of the fear and mistrust.”

Lucy had “instinctively tapped into the most powerful peacemaking power in the world” and we need it back again!

For more information and stories from the Women to Women for Peace successes, please read my other article on their visit to Cuba and the time when women from Cuba and America came to Wales