Head of Wales for Peace, Craig Owen, reviewed Dr Aled Eirug’s seminal work ‘The Opposition to the Great War in Wales’ – published by University of Wales Press – for the Spring 2019 Agenda, the journal of the Institute of Welsh Affairs (IWA).  This book is the culmination of Aled’s Doctoral Thesis with Cardiff University’s School of History, Archaeology and Religion.

To mark International Conscientious Objectors Day on May 15th 2019 – 100 years after the end of WW1, the ‘war that was to end war’ – Craig shares for WCIA Voices his ‘longer read’  review on this perspective-changing history of Wales’ Anti-War Movements – and considers the relevance to today.

As we mark the centenary of the post-WW1 Paris Peace Process whilst simultaneously bracing for Brexit – seeking to sever the ties of interdependence with our European neighbours – the publication of a history tome that presents a different perspective’ to Wales’ received ‘great war story’ might not seem immediately relevant. But perhaps the timing could not be more poignant – or the opportunity to learn from our forebears – as we reconsider Wales’ role in the world once more within a divided British society.

Previous histories of WW1 have tended to either airbrush out anti-war perspectives from the ‘narrative’ of the Great War as pockets of unrelated, individual activity; or conversely, lionised the heroism of Conscientious Objectors who took a stand against an imperial, populist state. Aled Eirug’s landmark work, ‘The Opposition to the Great War in Wales 1914-18’ paints a far more 3-dimensional picture. The most detailed study yet of the anti-war movement in any part of Britain through WW1, this look ‘behind the blinkers’ is a critical contribution to UK-wide social history, and profoundly relevant to Welsh identity, experience and political ideologies today.

Iraq, Afghanistan, Syria, Yemen … these conflicts of our time have been met with vocal anti-war movements that are not only a defining part of Welsh and UK civil society, but also national conscience. 100 years ago, to disagree with the government and populist tide could lead to social outcast and a prison sentence. Those who did so planted ‘anti-war’ seeds that today we take for granted – yet their story is rarely part of the WW1 narrative. Even now, after 4 years of nationwide events marking WW100, one could be forgiven for thinking that Wales was as one with the whole UK in enthusiastically supporting ‘the war that was to end war’ – united under the shrewd leadership of David Lloyd George, the UK’s only “Welsh” Prime Minister. But as for conflicts of today, such a view is simplistic in the extreme.

The onset of WW1 divided the nation. Beneath the populist call to arms and government propaganda, religious and political opposition to the war, of many differing shades, was witnessed Wales-wide. Aled maps this opposition systematically, not as pockets of resistance, but as patterns of beliefs – people motivated by a purpose, or rather a diversity of purposes – and importantly, looks at how this opposition became more organised as the war wore on.

Many Welsh non-conformists, and groups such as the Christadelphians and Quakers, reeled at the readiness with which the commandment ‘Thou Shalt not Kill’ was jettisoned to preach military recruitment from the pulpit (though many ministers refused, proselytising against the war). Interfaith organisations such as Cymdeithas y Cymod, the Fellowship of Reconciliation, were founded to counter the hatred of war. Socialist figures such as Keir Hardie and Ramsay MacDonald led an anti-war stance for the Independent Labour Party in Wales that, whilst initially unpopular – and indeed heavily persecuted by authorities such as tribunals – over the course of WW1 progressively attracted increasing support and respect, offering a new political home to ranks of Welsh Liberals disillusioned by the postures they felt their party had taken. Some who felt Wales had become subservient to British imperialism of WW1, would go on to develop Welsh Nationalist ideology that led to the formation of Plaid Cymru in 1925.

Central to Eirug’s exploration is the impact of the Military Service Act, compulsory conscription, in March 1916 which brought WW1 opposition into sharp focus. Those who objected on grounds of conscience faced Tribunals that were rarely sympathetic (particularly to political objectors). ‘Non-Combatants’ and ‘Alternativists’ were deployed to military or non-military work supporting the war effort, but ‘Absolutists’ – who were opposed to the war on moral grounds – were often court marshalled, and imprisoned or sentenced to hard labour. Some Welsh COs died from poor treatment and / or labour conditions. 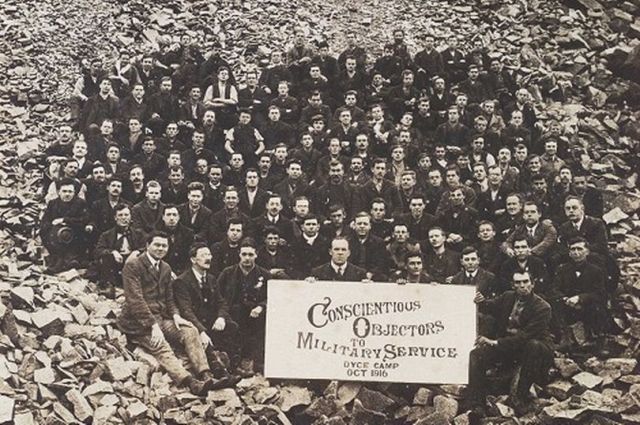 Whilst Eirug has been able to trace about 900 registered Conscientious Objectors from Wales – roughly proportionate to the rest of the UK –his research also highlights that these numbers would have been far higher but not for the creation of a Welsh company for theological students in the Royal Army Medical Corps (RAMC) – nicknamed ‘Gods Own’. Alongside Ambulance Units and other non-combatant roles, many of these objectors trod the difficult line of supporting those at the front, whilst opposing the war – a sentiment increasingly shared by many serving troops, and families at home, beyond 1917.

The No Conscription Fellowship (NCF) and National Council for Civil Liberties gave voice and organising infrastructure to Objectors, with local branches Wales-wide. But the Independent Labour Party, Fellowship of Reconciliation, women’s movements and Trade Unions all played galvanising anti-war roles in wider Welsh society, and it is perhaps here that this book most challenges the ‘received versions’ of history. Where others have cited, as evidence of pro-war strength of feeling, the ‘Battle of Cory Hall’– a Nov 1916 Anti-War meeting of 900 in Cardiff that was disrupted by a mob of ‘patriots’ – Eirug looks at what happened next. A rally of over 2,500 ‘peace builders’ reconvened at the Rink in Merthyr, “steeled by the Cardiff mob” to oppose developments of conscription. In depth studies of Merthyr Tydfil and Briton Ferry offer an insight into the depth and breadth of local Anti-War organisation. And a whole section of the work looks at the influence of the South Wales Miners Federations: the 1915 Miner’s Strike (over pay and conditions), and the 1917 ‘Comb-Out Ballot’ (a vote on conscription of miners) were both a significant litmus test of pro and anti-war sentiment, with a ‘longing for peace’ spurred – perhaps ironically today – by the hopes of the Russian Revolution.

The end of war on 11.11 1918, and the Peace Process that followed, saw a shift in societal views perhaps only matched after the end of WW2. Religious congregations were deserted by those whose faith in authority had been shattered by war. Formerly reviled Conscientious Objectors were elected as Members of Parliament to lead peace building efforts – figures such as Morgan Jones (1921, Caerphilly) and George M Ll Davies (1923, University of Wales). Anti-war groups channelled their energies into over 900 local branches of the new Welsh League of Nations Union, forerunner of today’s Welsh Centre for International Affairs and Temple of Peace.  Nearly 400,000 signed the Welsh Women’s Peace Petition to America, calling for leadership in the League of Nations for ‘law not war’. When it failed, at the outbreak of WW2 the provisions for military service exemption were more enlightened. And when finally WW2 ended, many of those Welsh figures who had stood so prominently for peace through WW1, the 20s and 30s, were to play a lead role in the founding of the United Nations.

Why is any of this relevant today? For me, what comes across so powerfully from Aled Eirug’s work is how, in a time of populism, polarisation and catastrophe, the peacebuilding efforts of Welsh people and communities inspired a new generation of internationalists– outward looking, but rooted in equity and communitarianism – and can do so again. This book is an essential ‘long read’ for anyone seeking to understand the Welsh national psyche, and where our national spirit just might take us.

Craig Owen is Head of Wales for Peace and Global Action, at the Welsh Centre for International Affairs (WCIA).

–> Download and use Learning Resources on Conscientious Objection from Hwb, for use in schools and colleges. 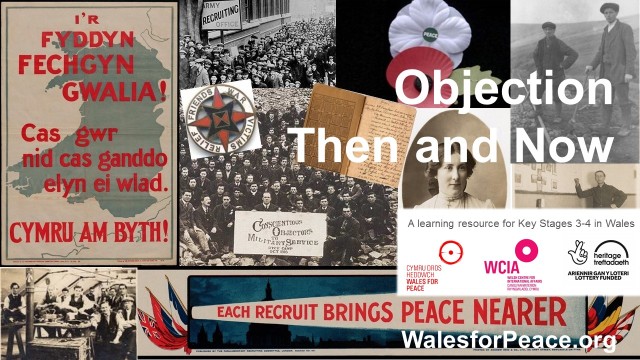